World Rainforest Movement recently published a report I wrote with Timothy Byakola of the Ugandan NGO Climate Development Initiatives, about an FSC-certified carbon sink project at Mount Elgon in Uganda. The report, “‘A funny place to store carbon’: UWA-FACE Foundation’s tree planting project in Mount Elgon National Park, Uganda”, includes a section on the SGS-Qualifor certification of the project. 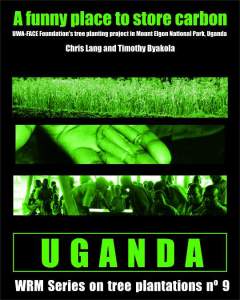 Under the project, which is funded by a Dutch organisation called the FACE Foundation, trees are planted to absorb carbon and the carbon is sold to people who want to offset their carbon emissions through flying. FACE is working with the Ugandan Wildlife Authority (UWA), which is responsible for managing national parks in Uganda.

In June 2006, I travelled to Mount Elgon with Timothy Byakola and Jutta Kill of Sinkswatch. I was shocked by what we saw. Villagers told us that the UWA’s management of the park is brutal. In 1993 and 2002, villagers were violently evicted from the national park. Since the evictions, UWA’s rangers have hit them, tortured them, humiliated them, threatened them and uprooted their crops.

A few days before SGS Qualifor awarded UWA-FACE with the FSC certificate in March 2002, UWA evicted more than 300 families from Mount Elgon and destroyed their homes and crops. SGS-Qualifor failed in any of their reports about Mount Elgon even to discuss the implications of certifying an organisation involved in a major, on-going land conflict.

A new World Rainforest Movement report ‘A funny place to store carbon’ documents human rights abuses at Mount Elgon National Park in east Uganda, where the Dutch FACE Foundation has been planting carbon ‘offset’ trees since 1994. The report exposes how villagers living along the boundary of the park have been beaten and shot at, have been barred from their land and have seen their livestock confiscated by armed park rangers guarding the ‘carbon trees’ inside the National Park.

The ‘offset’ project sells carbon credits to Greenseat, a Dutch company with clients including Amnesty International, the British Council and the Body Shop.

In Britain, ‘offset’ company Climate Care buys carbon credits from the FACE Foundation’s Kibale ‘offset’ project, in west Uganda. A report today on BBC1’s Inside Out programme will expose how villagers around Kibale National Park are paying a high price for living next to the FACE Foundation carbon ‘offset’ project and how workers are paid well below subsistence rates for tending the ‘carbon trees’.

“No-one is starving but it’s not enough anymore for luxuries such as milk” commented a former local council member at Kibale in a meeting with FERN’s climate campaigner Jutta Kill.

On its website, the Co-operative Bank assures customers that their “mortgages could not only save you money. They can help save the planet too,” and a car insurance from the Co-operative Bank comes with the conscience-salving message that ‘offsetting’ is “the easy way to make your car greener without costing you a penny more”.

“FACE gets a license to continue polluting – we get to plant some trees,” explained Alex Muhweezi, country director in Uganda for IUCN, the World Conservation Union at a meeting with WRM’s Chris Lang in July 2006.

“’Offsets’ are bad for the climate because they delay a shift away from our oil addiction,” explains Timothy Byakola of the Ugandan NGO Climate and Development Initiatives, who co-wrote the WRM report. “They are also bad for people when they exacerbate local land conflicts. Resolving the crisis at Mount Elgon would be much easier without the extra complication of a carbon contract.”

The villagers affected by the Mount Elgon ‘offset’ project are in no doubt that the FACE Foundation is storing the carbon they sell to climate conscious clients in Britain and the Netherlands on someone else’s land, and they possess title documents showing they are entitled to land now occupied by ‘carbon trees’. “We just want our land back”, said one.

“To prevent a climate crisis we need effective strategies that will transform the way we use and produce energy,” says FERN’s climate campaigner Jutta Kill. “The feel-good ‘offset’ business undermines the push towards a rapid switch to low-carbon economies. It nurtures the illusion that carbon emissions for that holiday trip to Miami have no impact on the climate as long as we buy our indulgences and pay someone else somewhere else to deal with our excessive emissions.” “In cases like Kibale and Mount Elgon, ‘offsets’ not only prolong our fossil fuel addiction, they escalate local land conflicts. Far from benefiting the poor, they make their struggle for access to land even harder.”

Notes
(1) The WRM report ‘A funny place to store carbon: UWA-FACE Foundation’s tree planting project in Mount Elgon National Park, Uganda’ is available here and here.
(2) FACE stands for Forest Absorbing Carbon-dioxide Emissions. The FACE Foundation was set up in 1990 by the Dutch Electricity Generation Board.
(3) BBC1 Inside Out programme (London area) report 12 January 2007 at 19:30.