A new report from Greenpeace published this month confirms what this website has beenwarning for nearly two years: that the FSC’s so-called Controlled Wood Policy is a shambles, and is allowing wood from highly unacceptable sources into the FSC certified chain of custody.

The report, called ‘Out of Control’ (available here – pdf file, 3Mb), follows detailed investigations into several logging operations in Finland over the last two years, during which all major paper companies have been audited against the FSC Controlled Wood standard. The studies revealed “clear violations” of the Controlled Wood Standard, including abuse of indigenous peoples rights, and exploitation of High Conservation Forest. Some of the wood entering FSC certified chains had been cut illegally inside protected areas, and where endangered wildlife habitat had been destroyed.

From the report: ‘Clear-cut in Ilosenkangas, eastern Finland. The forest had been identified as an intact old-growth forest with significant high conservation values.

Greenpeace looked into the sources of wood supply of companies Metsäliitto, Stora Enso and UPM. They found that all had obtained wood from areas that should have been excluded under the Controlled Wood policy. For example, according to the report, Metsäliitto had carried out “several controversial operations” in the Kytaja high conservation value forest area in South Finland. In 2008, the company “logged four habitats of the legally protected flying squirrel and a connecting forest between them. The habitats and the connecting forest had been defined to be protected by environmental authorities prior the logging and logging them was clearly against the law. Areas had been marked on the ground and Metsäliitto was informed of the protection decision.” Greenpeace reports that the incident is under police is investigation. Close to the same area in 2006-2007, Metsäliitto destroyed high conservation values in a Natura 2000 protected area. According to Greenpeace “this operation was against the EU’s Habitats Directive”. 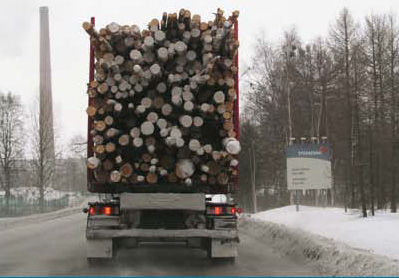 Greenpeace investigators followed timber trucks from the high conservation value forest of Liperinsuo (logged by Metsahalllitus), to the Stora Enso paper and pulp mill in Oulo in March 2008.

Greenpeace concludes that the Controlled Wood Policy should be ‘phased out’ within five years, or converted into a new scheme leading to a requirement for full FSC certification of all products carrying the FSC label.

Members of the timber industry and government procurement offices might believe that there is an even greater urgency to end FSC’s absurd ‘controlled wood’ policy, which merely invites laundering of non-acceptable wood into FSC certified chains of custody. Timber and paper companies could face prosecution under consumer protection laws for displaying FSC ‘Mixed Sources’ labels on their products, thus giving consumers the impression that the material is from an acceptable source – whereas some of it might be traced back to destroyed conservation areas. Governments such as that of the UK will worry about the prospect of future public embarrassment because wood or paper products used for government work are found to be in breach of their own regulations that are supposed to prevent material from illegal sources entering the supply chain. For them, an immediate end to the policy will no doubt seem a safer option, rather than being exposed to another 5 years of risk.

But FSC is likely to strongly oppose any fundamental changes to the controlled wood and mixed sources labelling system. There are now many thousands of such products on the market, possibly the majority of those carrying the FSC’s logo. Certification of ‘mixed sources’ products has vastly expanded the potential market for the ever-hungry certification bodies that now effectively control the FSC. They will no doubt particularly resist anything that would serve to reduce their highly lucrative and completely opaque Chain of Custody certificates.

So, once again, FSC faces the same dilemma: take control of the certifiers, or face oblivion.

Conclusions and recommendations from Greenpeace report, ‘Out of Control’

Based on the experience in Finland, the FSC Controlled Wood system allows companies and certifiers to work in an extremely nontransparent manner. Civil society may never be aware of Controlled Wood audits in their country, although the information provided by NGOs should be of crucial importance to the risk assessment. The standard is ambiguous on key issues like HCVFs and stakeholder consultation and guidelines are inconsistent. Th is allows for multiple standards – better certifying companies will work more rigorously and some will not contact any stakeholders during their audit. In Finland it seems clear that the system is currently not suffi cient to guarantee that no controversial sources are included in FSC Controlled Wood. This raises serious doubts about how the system could work in countries with poor governance and lack of basic law enforcement