In June of this year, we reported on the shocking atrocities against local communities happening in two FSC ‘Controlled Wood’ certified logging operations in the Democratic Republic of Congo. One of the two companies concerned, SODEFOR, had, by the time we reported, already had its certificate ‘suspended’, and was the subject of a formal complaint submitted by Greenpeace. The other, SIFORCO, remains certified (by SGS) to this day, but has also recently had a complaint filed against it by Greenpeace.

As a Greenpeace blog points out about SIFORCO, “villagers were fed up with the broken promises and seized some equipment from the company in order to get them to the negotiation table. In a mission of brutal retaliation, security forces came to the loggers’ assistance, raped women and girls, beat people up and destroyed property.” 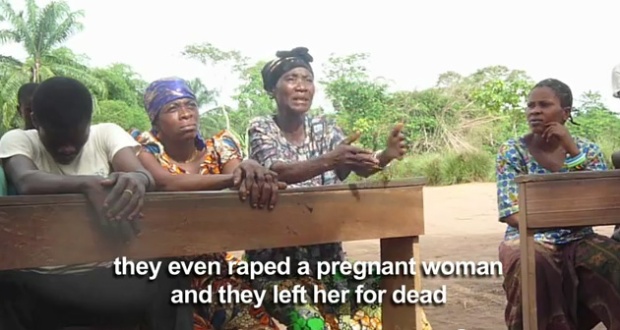 People sold down the river. Image courtesy of Global Witness.

A statement (opens pdf, 728Kb) issued in late October by Jose Endundo, DRC’s Minister for Environment, Nature Conservation and Tourism, concerning both the events related to SODEFOR in Oshwe in January 2010 and those in the village of Yalisika in May 2011 concerning SIFORCO, will do little to reassure those who have suffered atrocities at the hands of FSC-certified logging companies. But it does at least cast some more light on the disgraceful fraud that constitutes FSC’s so-called Controlled Wood Policy, and the actions of FSC’s certifiers.

Minister Endundo notes about the logging concessions that “resource rights within their boundaries are geographically ill-defined and, de facto, sometimes claimed by many different rights-holders”(1). This will come as no surprise to those who have been saying for years that the arbitrary issuing by the DRC government of logging concessions over vast areas of forest that are all under claims of traditional ownership and customary use by local communities is a powder-keg waiting to explode.

If the Minister’s statement has any value, it is what it says about the conditions under which SGS could have issued SIFORCO, a subsidiary of the Swiss-based Danzer group, with an FSC Controlled Wood certificate in 2010. Under FSC’s Controlled Wood rules, wood from origins with any of five characteristics must be avoided, including “Wood harvested in violation of traditional and civil rights” and “Wood harvested in forests in which High Conservation Values (areas particularly worth of protection) are threatened through management activities”. In order to ensure that wood can be certified as Controlled Wood, FSC’s accredited certifiers are supposed to conduct a risk assessment and, according to the FSC’s rules, “The results of the company’s risk assessment shall be made publicly available.”

So what does SGS’s Risk Assessment for the issuing of an FSC Controlled Wood certificate have to say about forest tenure in an around the SIFORCO concession? This remains a mystery because, if SGS has ever conducted such an assessment, it hasn’t made it public. SGS has, however, produced a Public Summary report for the certification. The problem with this report, though, is that it is such an amateurish muddle that it is surprising that the FSC Secretariat didn’t suspended SGS until it was corrected and made into something intelligible.

The problems with SIFORCO have now come to the attention of the international media, with Swiss TV broadcasting a piece which investigates the issues – available here, currently only with the original German narrative.

In early November, Greenpeace published a detailed briefing setting out its concerns with SIFORCO, and simultaneously submitted a formal complaint to FSC against the whole of the Danzer Group, which also includes the FSC certified IFO logging company operating in the Republic of Congo. Greenpeace has not made the complaint publicly available, but notes in its briefing that “To ensure that FSC’s reputation in the international marketplace is maintained it is clear that the FSC must not only move swiftly to disassociate from Danzer, but also provide credible commitment that no further certification in the Congo Basin is supported until the necessary preconditions for enabling credible certification are met”.

In response, FSC has issued a statement acknowledging that Greenpeace has filed a complaint under FSC’s ‘Policy of Association’. This procedure, which provides a mechanism for FSC to dissociate itself entirely from companies which might otherwise bring it into disrepute, has only been used on one previous occasion (in relation to the highly controversial APP company in Indonesia), and if successful could result in immediate cancellation of all Danzer certificates.

Danzer has also issued a statement in response to Greenpeace’s briefing.

Whilst it is to be welcomed that SIFORCO and Danzer’s certificates are being challanged, what should not be overlooked is that, what is at stake here is not really whether a particular logging company behaved in a totally unacceptable way or made mistakes – that is the least one would expect from most logging companies in the Congo Basin. The issue as far as forest certification and wider forest policy is concerned, is how such a company could have come to be certified in the first place?

The complaint against Danzer/SIFORCO is more than just another grievance against yet another certificate that should never have been issued. It is a warning that SGS’s certification system as a whole simply cannot be trusted. Arguably, it is FSC’s ‘association’ with SIFORCO’s certifier, SGS, that most serves to undermine FSC’s reputation, and it is from them that FSC should dissociate itself. Typically, though, and reflecting as ever the stranglehold that the certifiers have over the FSC’s policies, the Policy of Association rules cannot be used to break the FSC’s ties with any of its accredited certifiers, only with the companies they have erroneously certified. Until the FSC empowers itself to completely cut ties with certifiers whenever necessary, it will find itself constantly being associated with companies that bring it into disrepute.

The complaint against Danzer is also the latest signal that the FSC process is seriously ill-adapted to the conditions of the Congo Basin, and is probably unusable there. According to FSC-Watch’s calculations, the complaint means that the area under FSC certification in the Congo Basin which has been cancelled, suspended or formally challenged is now greater than the certified area which is, as yet, formally uncontested. What is stake is whether the whole model of ‘sustainable forest management’ (i.e, industrial logging) in the Congo Basin is a failed paradigm, and something which the FSC should have nothing more to do with.