This is the second post in a series based on ARTE’s documentary about FSC: “The exploitation of primary forests: Can an ecolabel stop the forest industry?”

The documentary was available online with English subtitles until 23 October 2018. It is available here (also in German).

In the Republic of Congo, the journalists Manfred Ladwig and Thomas Reutter visit an indigenous Pygmy village, inside a concession run by Congolaise Industrielle des Bois. CIB, which is now owned by Olam, is one of the largest and most controversial FSC-certified companies in Africa. The company has appeared several times on FSC-Watch in the past.

While they were filming, hunters returned from the forest with a monkey and two gazelles.

The Pygmies talk about whether they should stay in the forest, or move out, when the loggers arrive. The noise from the company’s chainsaws will scare away the wildlife that they hunt for food.

The women collect medicinal plants from the forest. They are looking for plants to treat headaches, coughing and watery eyes. “None of them have ever been in a doctor’s office that we would recognise,” the voice over notes.

The women drink water from the river. Maybe CIB will give them running water in their houses. And electricity.

They clear a spot in the forest where their ancestors are buried. They sing, clap and dance while they cut down the bush with machetes. Their ancestors would tell them to stay, one of the women says. “We should stay true to our roots,” another adds.

On the way back to their village, they walk along a logging road. They don’t know what the road will bring, but they sense that their lives could change quickly. They’ve heard that roads brought disease to other villages.

But there are also advantages. One man points out that it used to take them three days to get to the city. Now it only takes five hours.

“They will send us away when they get here,” a woman replies. “Gazelles and monkeys will leave before us. The loggers will take away the trees and cut a swath through the forest. The road is only the beginning.”

Ladwig and Reutter travel to Pokola, the CIB company town. They want to talk to CIB employees, but journalists are not welcome in Pokola. They had tried to get an interview with CIB to talk about FSC, the treatment of the Pygmies and the forest, and to get permission to film, but CIB stalled them for weeks.

In the end, CIB did not give the journalists an interview and did not allow them to film any tree felling. 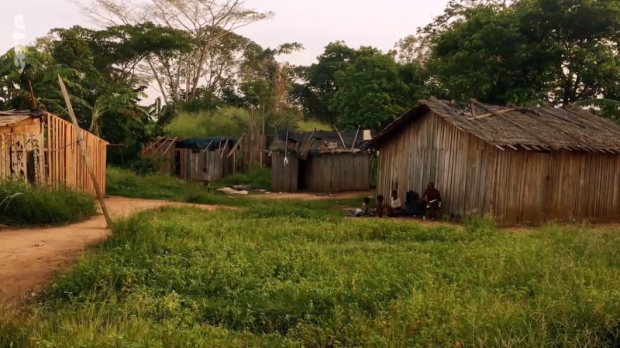 Behind CIB’s factory in Pokola, Ladwig and Reutter find another small town. This is where the Pygmies live who have moved to Pokola, attracted by the promises the company gave. But they still have no electricity and no running water in their houses. Neither do they have any work.

“Nobody from this village works for the company,” the village chief says. “The company employs people from far away from our village.”

Kim Carstensen, FSC’s Director General, tells Ladwig and Reutter that he’s convinced that FSC certification is the best way to help the indigenous people in the Congo:

But the benefits that Carstensen talks about have yet to reach the Pygmies in Pokola.

Ladwig and Reutter report that moderate wealth can be seen in Pokola and that CIB’s 900 employees have benefited. But they are a minority. Only a few of the Pygmies living in the vast forest area can use the schools and hospitals.

Most people live at the edge of the forest and are starving. Ladwig and Reutter film on pay day in Pokola. The logging workers get their salary in cash. The money goes on alcohol. The nights can be dangerous in Pokola.

They film a Pygmy woman begging with her child. Some Pygmy women are becoming prostitutes.

This is the second post in a series based on ARTE’s documentary about FSC: “The exploitation of primary forests: Can an ecolabel stop the forest industry?”
The documentary is available here (and in German here).