For the recent documentary “Who is Protecting our Forests?”, ARTE’s journalists Manfred Ladwig and Thomas Reutter visit Industrie Forestière de Ouesso’s Ngombé logging concession in the Republic of Congo. The concession covers more than one million hectares, all of which is FSC-certified, according to the documentary.[1] IFO is part of Danzer GmbH, a company registered in Switzerland.

The company has built a series of logging roads through the rainforest for its trucks. At the side of the roads are Pygmy villages.

“Why have the forest dwellers moved out of the forest to live at the side of the road?” Ladwig and Reutter ask.

Previously, Pygmies would hunt in the forests for their food. But now, their subsistence hunting is considered poaching. IFO does not allow villagers to hunt in its logging concession.

Uniformed eco-guards take hunted animals away from the Pygmies. In order to comply with FSC rules, logging companies have to restrict poaching inside their concessions. As a result, the Pygmies do not have enough to eat.

When Ladwig and Reutter visit, the villagers are preparing a spinach dish (Saka Saka). No meat or side dishes.

The company didn’t offer the Pygmies jobs when it arrived in their forest. “We are the village of the unemployed,” one of the villagers says.

“We are not allowed to hunt. Our children don’t have a chance. We’re not allowed to do anything. In the city, nobody wants us, either. The company should leave again,” another of the Pygmies says. “Who cares about us?” she asks.

When the company arrived the Pygmies were told that IFO had bought all the forest, and that they should move away.

The Pygmy women plant cassava and Saka Saka in a small clearing in the forest. Since they can no longer hunt, cassava has become their staple food.

The eco-guards told them they could not plant in the concession at all. They could only plant a small area, for their own use. They showed them where they should plant. “They didn’t negotiate,” a villager says. “It was an order.”

The Pygmies say that IFO has deprived them of their livelihoods.

Ladwig and Reutter asked IFO for an interview several times. The company denies all accusations and declined to be interviewed. The journalists tried to drive to the company’s headquarters to ask for an interview, but they were stopped at a road block. 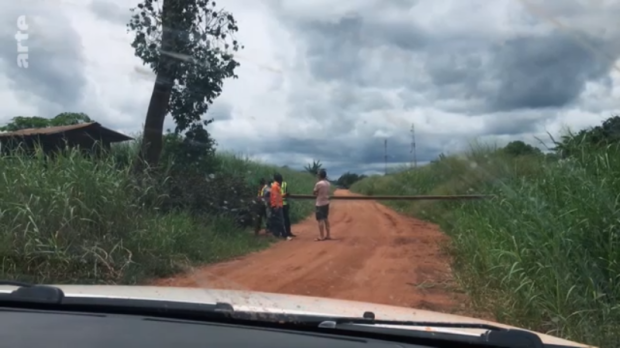 They were followed on the way back from IFO’s headquarters. When they got to the nearby town, Pokola, the police arrested and questioned them. They were accused of unauthorised filming – although the Forest Minister had given written permission for them to film.

“We were released only with the help of the German Embassy,” the journalists say.

“I have been to both CIB and to Interholco,” Kim Carstensen, FSC’s director general, says in the documentary.

“So I’ve seen all these things, and I certainly know that indigenous peoples are being respected and that they are given access to modern facilities that they’ve never ever had before.”

Carstensen doesn’t mention that in January 2018, the certifying body Rainforest Alliance carried out an audit of IFO’s Ngombé concession. Rainforest Alliance’s auditors “acknowledged the very difficult work of eco-guards”, but reported that IFO’s eco-guards “are feared and hated by the population”.

[T]he eco-guards are not without fault since they invade villages and houses without following established protocol, to seize meat and basic hunting weapons, and sometimes ask the villagers to pay unapproved fines. The auditors received testimonials on this matter from persons directly affected in three of the five villages visited, as well as from local NGOs and IFO workers. Despite the training given by IFO, the eco-guards do not always respect the protocols established for conducting inspections in the villages. This represents nonconformity.

This is the fourth post in a series based on ARTE’s documentary about FSC: “The exploitation of primary forests: Can an ecolabel stop the forest industry?”

The documentary is available here (and in German here).

[1] In fact, thanks to the wonders of FSC’s Policy on the excision of areas from the scope of certification FSC-POL-20-003 (2004) EN, not all of IFO’s concession is actually FSC-certified. FSC-Watch will look at the implications of this in a future post.