Most of the recent ARTE Documentary about FSC focusses on problems with FSC-certified operations in the tropics. But ARTE’s journalists Manfred Ladwig and Thomas Reutter also travel to Sweden to investigate whether FSC is doing better in the primary forests of the North.

The segment about Sweden starts in Maryland University, in the office of remote sensing scientist Matthew Hansen. On his computer screen, Hansen brings up an image of cleared forests in the Nordic countries.

He points out that the border between Finland and Russia can clearly be seen. “And it’s the land use,” he says. “The land use of Finland, and one of the major economic activities is forestry, and Sweden.”

“You can see IKEA from space,” he jokes.

The timber goes to make furniture or pulp and paper, to feed the demand for packaging driven by the internet-shopping boom.

FSC is proud to be helping market cardboard packaging, as this recent tweet from FSC Belgium illustrates: 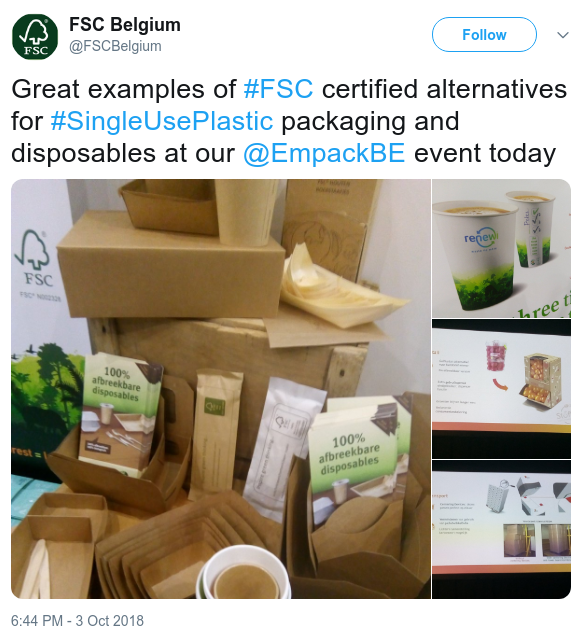 Sebastian Kirppu has documented the destruction of Sweden’s forests for years. He takes Ladwig and Reutter to an FSC-certied logging operation run by Sveaskog, a state-owned company that owns 14% of forest land in Sweden.

FSC requires five out of every 100 trees to be preserved – the five most ecologically valuable trees. “I think that the protection of 5% is way better than the protection of nothing, which would be the business as usual scenario,” FSC’s director general, Kim Carstensen, tells Ladwig and Reutter. “So protecting 5% has enormous value, it has enormous value for biodiversity.”

In the forest, Kirppu points out how ridiculous this is. One tree will be left standing in a clearcut, and all the species from the logged trees have to move to the one remaining tree to survive. “That is very strange,” he says. “Because the chance of this tree [providing a habitat] for all the species that are living here for the moment, that’s impossible. It doesn’t work.”

Kirppu points at a clearcut. “This is not sustainable forestry,” he says. “This is killing forestry. This is how you kill the ecosystem of the forests of Sweden.”

Malin Sahlin from the Swedish Society for Nature Conservation has written one complaint after another to FSC. But in each case the outcome is the same. The forest is logged.

“I’m tired that it still goes on,” she says. “It’s the same scenario as it was 10 years ago. I’m doing the same thing. I’m writing the same words for the same company and I’m getting the same answers.”

Sahlin tells Hoffner that, “The country needs the forestry industry and the jobs. But let’s stop cutting the old forests down.”

Hoffner interviewed FSC-Sweden’s director Lina Bergström. “I wish we could have more backbone,” she said. “But big companies make mistakes. We are not a monitoring system, we are an improving system. It’s a slow process, but we’re getting there.”

But seven years later, it’s obvious that FSC-Sweden isn’t “getting there”. FSC still has no more backbone than a slug. Sweden’s primary forests continue to be destroyed. And FSC continues to certify the destruction.

This is the eighth post in a series based on ARTE’s documentary about FSC: “The exploitation of primary forests: Can an ecolabel stop the forest industry?”
The documentary is available here (and in German here).